About me: An avid gamer, I spent my time picking apart the newest games while studying at sixthform. 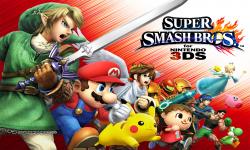 I find the 8 player smash to be the most exciting aspect of the upcoming game!

on Super Smash Bros. is Giving Some 3DS Owners a Headache...

I wonder if Ninty will create an updated, stronger circle pad? Kind of like when they gave out gloves for people with mario party to prevent blisters.

This could certainly bring in some much needed interest for the fighting genre and for Nintendo. Well done.

Soldier on, soldier on