Monopoly, as both a ubiquitous family board game and common target for snarky articles about how it was never meant to be fun, remains one of the most instantly recognisable and long-lasting icons of American entertainment culture. It's no wonder, then, that Hasbro has managed to collaborate with every property under the sun, turning standard vanilla Monopoly into something of a tired anomaly in most homes. Indeed it almost seems the driving force behind most Monopoly purchases today is for the joy (ironic or not) of owning or gifting a themed icon, rather than any expectation of fun with the board game itself.

And I could spend a very long time analyzing or debating whether or not Monopoly is any fun at all, but that's a conversation that will likely never end so if you don't already have an opinion, let's just say that Monopoly is, in a similar vein to poker, very very fun to win but at the great expense of everyone else, as most games see one capitalist mogul snowball themselves into an unconquerable victory half-way through.

More often, enjoyment is tied to the intellectual property-printed outfits Monopoly loves to prance around in. Whether you're buying spaces on Graceland and Tupelo in Elvis Monopoly or paying to land on Tia Dalma's Shack on the Pirates of the Caribbean board, the rules are flexible enough to wear countless faces without any fundamental changes. And yes, these crossovers have extended to video games. From Mass Effect, Sonic the Hedgehog, and World of Warcraft to Nintendo franchises like The Legend of Zelda and Pokemon, just about everything with a sizeable following has received a Monopoly box at one point or another. I'm sorry to say that this is not even the first general Nintendo-themed Monopoly, as that honor belongs to Nintendo Collector's Edition Monopoly released in 2006. 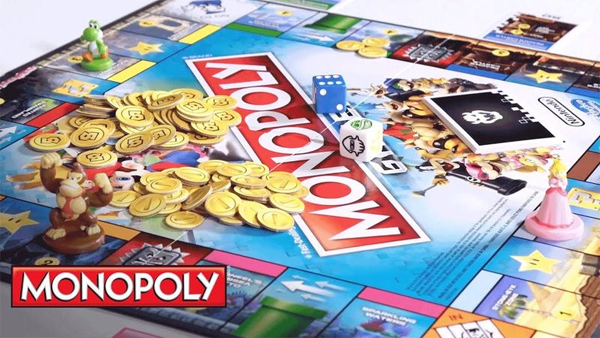 What the perhaps ill-named Gamer Edition Monopoly happens to be, however, is one of the first times in recent memory that the fundamental mechanics of the game have been altered, even if just by minor tweaks, to better fit into the mould of its theme. Gamer Edition Monopoly is still the basic game, you spend money on properties and force other players to pay up, but gone are the colorful paper bills in favor of Mario-themed gold coins, and the player pieces are altered as well. Each character (the box includes Mario, Donkey Kong, Bowser, and Peach) have specific skills that can alter the state of play, almost as if they were some analogue to toys to life...

In addition, the game is now won by points instead of the traditional money. Points are earned by buying property, counting up end-game money, and by beating "bosses," which are essentially buy-in roll-off challenges. There are now power-up abilities summoned by a roll of the dice near the end of every turn that include memorable throwbacks to Mario Kart like a red shell to force another player to discard three coins (a green shell only works on the player ahead of you, cheekily).

While the game still carries the spirit of the core monopoly experience (i.e. wanton greed and nihilistic existential crises), many of the alterations made to fit this new mould feel somewhat arbitrarily added to excuse the "gamer" motif at every turn. Indeed the point system itself seems to exist just so the box can proudly exclaim "Battle for the Highest Score" because video games used to be about that aeons ago.

Luckily, the additions aren't so complex as to be overwhelming. There are only six power-ups at your disposal, though be warned that they will all make your friends miserable and unlikely to invite you back to game night, and the boss battles are so simple you'll likely wonder if it was worth interrupting the flow of the game for them.

Ultimately, Gamer Edition proves exciting enough, but many of the changes are shallow enough to not impact the care in any measurable way. At their best, they offer small shake-ups to the game's flow. At worst, they seem entirely instigated by capital (fittingly), as the character traits are likely there so Hasbro can sell you additional characters with their own perks in booster packs. Visually, the board is missing a little of the original game's ageless charm, as it's covered in colorful graphic design and the traditional pewter pieces are replaced with little plastic figures reminiscent of amiibo, albeit far cheaper.

Monopoly is, in many regards, a tired, well understood set of mechanics, and it makes sense why Hasbro would be interested in revitalising the formula to stay competitive. Not all of the changes are bad! While a bit messier than the traditional paper bills, moving to coins means the currency exchanges are simpler, with just about everything kept to single digit transactions. Sadly most other additions feel either like inconsequential tangents at best or pandering at worst. Board games and video games, even those that sport local multiplayer, serve different goals and deliver on separate strengths inherent to their media. The constant references and ties to video games found in Gamer Monopoly may ultimately make you wish you were playing a video game instead.

I used to play Monopoly.