Published by THQ, Developed by THQ

Much improved from the first game.

Avatar, the burning earth is a game with much potential and a good chance to become a famous game. It starts in book two from the television series, where Aang has mastered waterbending and must then move onto earthbending.

The first game focused on the first series, water, but did not stick very much to it's storyline and fell apart in my view. It was made very badly as if it had been rushed. However, it's successor proves to be much better. There are more characters to play with, more choice, and I think it is rather more fun to be able to play in the characters footsteps, just like they are on TV. 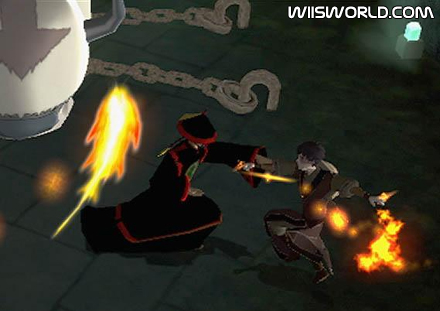 It is made into chapters, which are each quite short but still fun. With the Wii console bending moves can be done solely with the controller, however there are some combo and special moves that need B, - z and the toggle button to use. You get to swap characters continuously, becoming Katara, Aang. Sokka, Jet and even Momo, those being a short list. As these characters are in twos when they are played, a friend can join for the fun.

There are small flaws that were not smoothed over in the making. Appah can be strenuous rather than fun to fly, and attempting to attack at the same time is a tough chore. Playing with a friend is vital to make this part enjoyable.

Also, though not as many, there are invisible walls as in the first game. At the beginning which is traditionally easy, there are unfairly strenuous boss fights that you would expect to find at least half way, such as in the swamp, chapter four.

It is a fun game overall, the menus and features are rather neat. You can choose which combat types you want strongest, and with Aang you get to use all sorts of bending, learning and in focus moves.

I do believe, taking in all aspects, that it is an excellent buy for anyone interested in an action/fantasy genre game.