Dust off your slingshot, it's Bully for the Wii! A port of the PS2 game, this game is often called "GTA Lite", which is fairly true; Rockstar's style can be felt all over this game, from wacky characters to inside jokes, it's all there.

There are notable differences however, instead of being a criminal mastermind, you are a troubled kid coming from a troubled home, who has been expelled from many schools until he attends Bullworth Academy. Police do make appearances, but on top of the law, you have to deal with Prefects who will tackle you as soon as you violate the dress code. 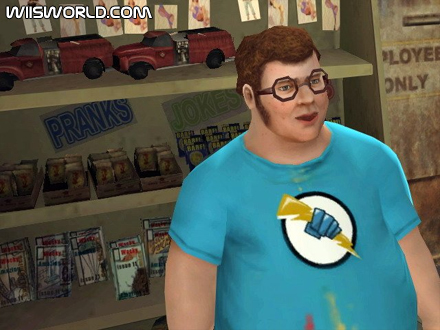 Bullworth Academy is a huge immense world, full of all your favorite cliques: Jocks, Greasers, Preps, Rich Kids, Bullies, Townies, and of course Nerds. However, you are not contained within the walls of the Academy, the whole city of Bullworth is eventually unlocked and you can make your way outside of the school gates, bringing your mayhem to the whole city.

In true GTA fashion, everything you do will affect the world around you. Anger one clique, you gain praise from another. Mess with an object in the world, you hear chatter about it throughout the game. It's a very satisfying game that you can easily relate to.

Gameplay consists of getting up each morning, deciding either to go to class, or skip (which, will also have the prefects onto you), and doing certain tasks that will lead you to your goal - ultimate domination of the school.

The whole experience is fun, but eventually feels repetitive (what sand box game doesn't?). Also the law in the game is really, really strict. One step out of line can fail your mission, which can become very frustrating.

This is a great game, I recommend it to any Wii owner. If you played the game on the PS2, you might want to rent it before you buy, just to make sure you like the add-ons.