Published by Activision, Developed by Treyarch

A fun game, with a few changes needed.

Call of Duty: Modern Warfare Reflex brings us a whole new dimension of shooting action. With a full port of the original game that was released in November of 2007, it makes for a fun game for the Wii. The graphics for the game are not stunning, however it makes up for it with the considerably fun gameplay you will experience.

I enjoyed the campaign, however I found that the controls with the Wii pointer were extremely inaccurate, and the frame rate makes the game seem choppy. The graphics definitely do not meet the standards of games like The Conduit, however I think the gameplay beats it, while the game's campaign doesn't take a mere 2 hours to beat. 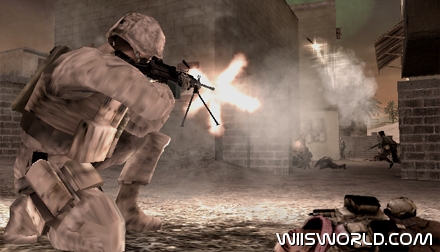 If you are planning on purchasing this game, make sure your Wi-Fi is working, because the online is absolutely epic, with all of the guns you've seen in the old Call of Duty franchise, just with that touch of Wii and what Treyarch does to online gaming.

The online multiplayer has 5 versus 5 support, and with the 13 different game modes and the epic hardcore gameplay, You should like the game, no matter who you are. The game has 16 maps, I believe all of the originals from Call of Duty 4. They did remove killcam, which might be a good thing for campers, but bad thing for people like myself who don't know all these little frigging spots.

You can also join your friends games, Invite friends to your game, and the host migration system is there, but it still sucks because it doesn't migrate in game.

If you're a fan of the call of duty franchise, this game is definitely worth your money.