Published by Nintendo, Developed by Paon

Critics were high when they reviewed this.

A 4 out of 10? I don't think so. This is a really solid racing game.It was originally suppose to be a Gamecube game, until it died. It was suppose to be the last game using the DK Bongos. For some reason, Paon did not transfer the compatibility to play using the bongos, even though they are full compatible with the Wii. Let's start.

Gameplay: You use the Wiimote and nun chuck. Shake the Wiimote to turn right. Shake the nun chuck to turn left. Shake both to jump. The game accelerates on it's own. It's hard to explain, but it is a truly amazing game play. You can go even faster by holding down the control stick on the nun chuck and letting go. It's called a wild move. Use it to hit barrels, enemies, and other players to increase your speed. That's how you can take the lead, and I think critics didn't get it. There is even a full length tutorial right in the game. There are many characters. Kongs and Kremlings. Each Kong has the same speed, power and acceleration as another Kremling. There are difficulty levels and many courses. 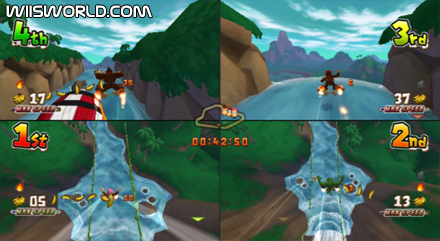 Lifespan: There are many game modes in the game. Grand Prix, Time trial, free race, sing race, etc. There is even a mission mode. Many missions, and they are very challenging. The game will last you about a week or two, maybe a month.

Sound: Has a great remix of the DKC theme. Gets 10, right away. There are also some other good tracks.