This game is amazing. It's funny, I thought wings was gonna be great, and this a bit more poor - but it's the other way around! The controls are really smooth and although it took me about 5 mins to get used to when I first put the game in, I realise that this is the definitive way to play a flight sim. I cant wait to see more flight sims on the wii!

Anyway I'd pitch this game to be like in between air combat on the PS1 and afterburner. There is lots of action and I actually felt a rush on some missions as the dogfighting is amazing. The only way to play though I feel is with the professional control setting as you can barrel roll properly, it would have been nice to have an option to choose where buttons go mind, but nothing that really gripes you. 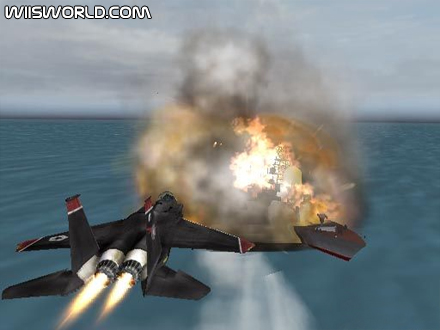 One other amazing addition to the control is when someone gets a missile lock in which you can do certain maneuvers with the nunchuck and the remote to evade. e.g "HIT THE DECK" involves pushing both nunchuck and remote straight down abruptly. The missile system which I thought was going to be bad as you have infinite missiles is actually well balanced as the missiles work on a recharge system.

It's satisfying gunning down your foes, the learning curve is very good also. There is some nice basic kitting the plane out before you go, but nothing complicated. The graphics are lush. Examples of this are when flying through clouds as well as the backdrop they use for the sky. Although it can seem basic on some cutscenes when they show things close up on the ground, in game the speed of which you fly about makes up for it.

There are some nice effects when you shoot the water with your guns and explosions of the planes are great. The sound is also great in terms of sound design, music is slightly weak as there's nothing too memorable about the tracks, however it does more or less suit the game. But I find it hard to hear the radio'ed voices, especially when the afterburner kicks in. Although you can change the audio settings to rectify this to an extent, I feel it's still not quite right in terms of levels between everything.