Stop reading and buy this game!

Have you ever heard your friend say "If Nintendo makes a spin-off for a Zelda game, then I'm gonna destroy Nintendo"? I have. Nintendo's Zelda games are like gold to the company and every fan of Zelda naturally expects the same type of adventure with different items, weapons, characters and areas to explore. That goes well for the series, and no real Zelda fan would want it to change, because after each grand adventure there's a mini adventure where you explore different areas with a great follow-up story to go through. For example: Majora's Mask and Phantom Hourglass. This time it's different.

The newest Legend of Zelda game Nintendo presents to you is: Link's Crossbow Training for the Wii. And guess what, it's a spin-off. 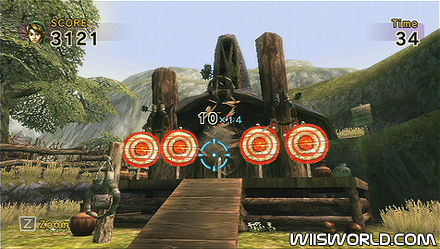 For those of you who don't know what a spin-offs game is, I'll tell you. It's basically a video game filled with mini-games, after mini-games worth of fun or failure. This LoZ game goes straight to the fun department. When you get to the menu screen,you see three option of games to choose from: score mode, multiplayer, and practice. In score mode you'll be able to go on specific missions (or mini-games) to play through. Each mission is contained within levels (nine to be exact) and there are three missions to go on within the levels.

During the gameplay you get to use two control options. The Wii Zapper and the original setup. Both controls works great and shooting first person with a crossbow isn't any different with shooting with a pistol in a war video game. The second menu option, multiplayer, allows you to play up to four players with friends or family but not simultaneously, just sharing the wiimote by turns. In this option you get to play any mini-game you've unlocked in the game by choice. And last but is least is practice mode. This mode is just like multiplayer mode except that you can choose to play by yourself.

This game is good. Nintendo might have pushed it over the edge with a spin-off game for Legend of Zelda, but it's acceptable.