The first person to review a game without the game.

Like the previous game, each character is placed into the following 4 types; Speed, All-Around, Power and Skill. 5 characters are placed into each type, making 20 characters total through the game. The first 16 are all veterans from the Olympic Games. The 4 new characters new to the Olympic world are Metal Sonic for Speed, Bowser Jr. for All-Around, Donkey Kong for Power and Silver for Speed. These are the only characters you can choose from, and no unlockable characters. That sucks cause I was really looking forward to playing as characters such as Rouge or Jet. Or Eggman Nega. 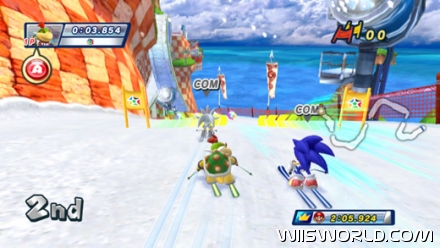 Say goodbye to those tiring and crappy controls from the last Olympic Games, because now you are greeted with more reasonable and simple controls. Use the Wiimote and Nunchuck combination to the prior events to steer left and right on your snowboard or skis. Like in Mario Kart Wii, while you're in the air, shake the Wiimote while in the air to perform tricks and stunts that help you get a speed boost when you hit the ground. Just flick up your Wiimote at a jump, Do your tricks, and then land with a boost. It?s that simple. And for the Wii fit board, use your feet to steer and use your Wiimote and Nunchuck as skis and your Wiimote to do tricks when snowboarding. The gameplay also lets characters have their own individual moves. For example, Sonic uses his spindash, Mario spins like in SMG, and Luigi, well, all he says is LUIGI GOOOOOOOO.

Sega this time actually learns from their mistakes, because now, they've added something for you to do: Festival Mode. So the lifespan is much better than the last game by using the festival mode to amp things up a little bit. And there are more challenges, more unlockables, and more.

The graphics have improved a great deal this time around. Mario and Luigi look like they got tans in the Large Hill event and it always seems like Sonic's smiling about half the time. Other than that, the graphics and everything else looks pretty good in the game. 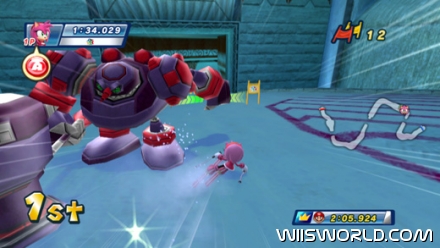 The voice acting is once again so-so. It feels odd how all the characters repeat the same thing over and over again whenever they start an event. Like how Silver says that he won't lose everytime he starts an event. And how Sonic says "faster than the speed of sound!" Yeah, you really showed us that in the Olympic Games, Sonic. The characters never say anything prior to the actual game or event. And remember, Daisy rhymes with lazy, because all her voice clips are 100% recycled. What is this, Mario Kart Double Dash?? I don't play that many new Sonic games (mostly because everyone says that they suck) so im not used to characters such as Tails and Knuckles voice acting. I'll get over it.

I really liked the music in the game though, like the theme of Sonic Heroes, the ending credits song to SMW, and the Good Egg Galaxy music from Super Mario Galaxy! The music in the game nicely incorporates with the creative levels that the put into the game. Nuff said.

It always seems like Sega always try to make themselves look just a little better in this game and their Sonic Games. It's not so little if you play Sonic's World in Dream Figure Skating. If you play both worlds, you can easily tell the difference in styles. Sega obviously made Sonic's World more "cooler" than Mario's World. In Sonic's World, you jump on springs, collect chaos emeralds, and do homing attacks. Heck, they even put in perfect chaos to fight! And for Mario?s world well, all you do is chase a star. So sega made it so that Sonic's World is a little more "actiony" than Mario's World. 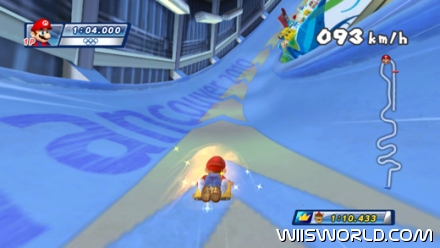 So overall, Mario and Sonic at the Olympic Winter Games is an overall improvement over the last game, and you'll find it much more satisfying to play than the last one. Although this is a good game to buy and play, it'll probably immediately be put away and be stacked under the new upcoming games such as New Super Mario Bros. Wii, Metroid Other M, and Super Mario Galaxy 2. With these new games, Mario and Sonic at the Olympic Winter Games will probably be stacked under these games when you buy em'.

insultman911, the first person to review the game without buying the game and playing it XP.