Charged and ready to roll.

The Mario Strikers series has a reputation for having crazy rules not found in regular soccer. Rule 1: HURT the opponents. I'm serious the brutality in this game compares to even the Super Smash Bros series. Crazy items like the Chomp destroys the field AND your opponents. 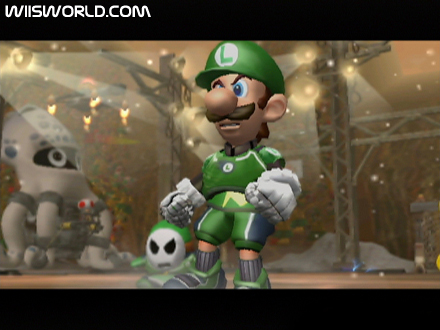 There are new specials specifically for team captains (Mario, Luigi etc), use them wisely. Super strikes er...MEGA strikes are new as well. You are able to shoot up to 5 balls at once during a Mega strike. But this time the opposing team is able to block them manually. Unfortunately, Bowser will not be returning to romp, stomp and breathe fire on the field at random times *sob*. But you can do all that now that he is playable! *hooray*

Rule 2: HURT people you haven't hurt yet. The cast of characters has grown abundantly with new playables like Bowser Jr, Diddy Kong and new sidekicks like Boo and Dry Bones. Sidekicks also now have their own special strikes. They're pretty darn useful.

Rule 3: HURT people ONLINE! Yes you heard it here folks, Strikers is WI-Fi! Have a grudge match with your amigos or have it with random people. The leaderboards are also fun if you're competitive or if you just want your name out there. Remember, no one's never NOT playing. Does that make sense?

The controls are a bit tricky at first so I highly recommend the tutorial (even if it is long). Overall, Mario Strikers Charged is a great game to knock people around a bit.