This is bad to a whole new level.

I'm just gonna say this now, ninjabread man is a load of s**t! When I saw it in the store I thought it might be quite good since the name was kinda funny and he does look pretty cool on the front of the case. Little did I know I had bought the worst game I have EVER played.

To start with, there are only three levels, four if you count the tutorial. They all look exactly the same, which is absolutely dreadful. Bland landscapes of what I assume is meant to be cookie dough or something, I'm not sure, and cameo appearances of different biscuits as platforms really doesn't appeal to me. Ninjabread man looks passable I suppose, but is still really very bad. 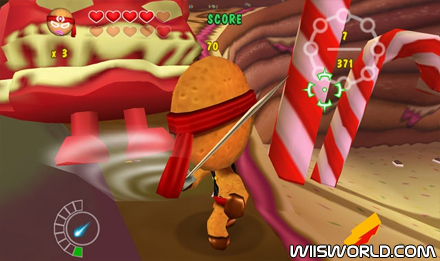 Correct me if I'm wrong but there are only two types of enemy, two or three sommat like that. 1: Cakes - Understandable for a candy game but surprisingly difficult to kill, the controls really don't help. 2: Bees - What?! What do bees have to do with candy? It doesn't make sense, it is just so stupid!

I could type about how bad this game is for ages but I have stuff to do so I'll end it here. Do NOT buy or rent this game, not even to destroy it!