Being number 1 is a really bloody job.

No more heroes story is about a poor otaku named Travis touchdown who in which one night met a lady named Sylvia, well Travis bought her a drink and she asked him if he would like to become #1 in a league of assassin's called the UAA. If anyone has played a goichi suda game they know it's going to get weird and believe me it really does. Travis accepts and kills a drifter named helter skelter and with that Travis is 11 and the game begins to where you must take Travis and hunt down the other 10. 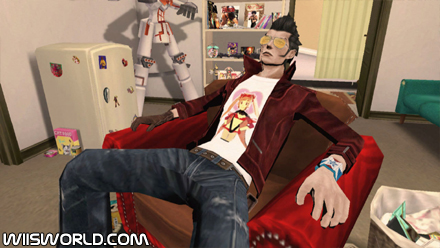 The game play of No more heroes is free roaming to where Travis can freely move around the city of santa destroy taking up odd jobs (like collecting lost cats!) and assassin gigs (killing a pizza companies ceo may be wrong but is worth $75,000!) to get enough money to pay the UAA to fight against the next highest ranked assassin or purchase new weapons and clothes. Once Travis pays for the next match he gets directions to where the assassin wants to fight and he hops on his large bike and takes a drive. In battle the wii controls for no more heroes is excellent, basically "A" is the swipe the beam katana button while "B" is to kick. Adding to this simple equation is your stance which is done by holding the wii mote up or down which then added to A or B makes you have high strikes/kicks or low strikes/kicks. Wrestling moves are another big part in the game play of No more heroes in which, if you kick an enemy in the right stance they will become stunned for a period of time to which pressing B at this time will activate a wiimote icon and nunchuk icon to appear, both point in a general direction. Once the player moves both wiimote and nunchuk in there directions that are shown Travis then will wrestle the enemy/boss to the ground and inflicting a large amount of damage to the enemy. (Satan?s ferris wheel is a real wrestling move...did you know that?) Once the enemy has died you must perform the finishing strike to where you chop the enemies head off or split the enemy in half vertically just by swing the wiimote one direction that will pop up as a icon.

Graphics in no more heroes are done in a cell shaded format that was used in killer7 and are by far a lot better. The characters are well shaded and the colors of santa destroy blend together super nicely that shows Grasshopper took there time with this game. Any suda 51 fan should know that designs in every one of his games are unique and for no more heroes it continues down its freaky ass road. (a granny with a nuclear turret mounted to a shopper cart, a movie actor with a laser on his crotch just to name a few.)

Finally, the sounds of no more heroes is done really nicely to the point where all the metal clashing, all the blood flying and all the recharging of your beam katana can be heard threw the wiimote speaker. Voice acting is another strong point that made killer7 great and is still pulling it's great weight in no more heroes to the very "F*** you!" coming out of Travis touchdowns mouth. One thing I found that was super cool in No more heroes is that right before a match Sylvia will call Travis' cell phone and she will talk to you threw the wiimote!!! Also to show it's not some stupid gimmick it can not be heard threw the TV's speakers so have those wiimote speakers on!

Overall, I am a big Suda 51 fan and I must say this is one of his best works to date. In the same retrospect it is probably the best wii game to date (yes this destroys Super Mario galaxy In my opinion) and every hardcore gamer with a wii should dish out the $50 and purchase this game!