With a variety of trailers and cool information before launch, this game was almost as hyped up as El Big Mama, AKA Twilight princess. It is a first person shooter for the nintendo wii, and of course it uses the point-and-shoot functionality perfectly.

The basic storyline is that you're in Tokyo and your brain-dead girlfriend is showing you her dad, because you're about to get married to her. Little does she know that her dad is a leader of the yakuza, and she gets kidnapped and his taken away by a traitor of your fiancee's dad. The whole game you're going around, helping the yakuza and trying to find your fiancee. 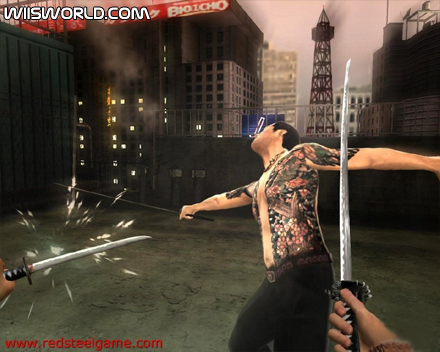 Not only does this game have gunplay, it has swordplay which can be great most of the time, but it doesn't really seem like two samurai going at it. It feels more like two cavemen beating each other with wooden clubs. But overall the game has some cool guns, a lot of great levels and good multiplayer.

One huge downfall of this game is the dialog. It sounds like ubisoft just got some random japanese people off the streets and asked them to speak English. The dialog can also be hilarious at times, but not in a good way, it's more of "ha ha that dialog is so 'tarded!".

Overall, the game packs quite a good punch and is like no other first person shooter. It's way better than Call of Duty 3 and is the best FPS on the wii so far. I recommend this game to people who know how to use the wii remote well and were disappointed with Call of Duty 3 or FarCry.