A nice, though unspectacular entry to the series.

Everyone SHOULD know about the SSX series. Probably one of the greatest snowboarding games of all time, every SSX installment has been a great one, and developers have decided to test their luck again on the Wii with SSX Blur.

Like I said SSX games have always been great, unfortunately though, developers did not succeed on emulating Wii controls very great. Not to say they don't have their pro's, but the con's do stand out. At times they're unresponsive and at others it just is not fun, such as the Uber trick, which can only be performed with enough points, is unintuitive seeing as the motion you must execute is plain stupid. Although actually SNOWBOARDING with the Wii controls certainly is exciting. 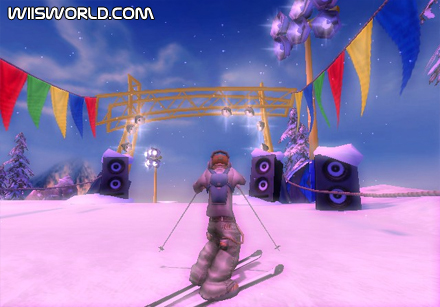 Graphically, SSX Blur sports some impressive textures and effects, although still, the Wii is left untapped of what it is truly capable of. Character animations are nice and animations look solid. The environments, though they look good, have some places which seem unfinished.

Audio in the game is nice, using some music that fits with the scenario. One thing I will point out though is the voice of that announcer. He is so annoying you'll probably be yelling at your television to SHUT UP!

The lasting appeal leaves much to be desired. Though many of the options are fun, when everything is said and done, there's really not much to come back to.

Overall, SSX Blur is a nice entry to the series, but is unspectacular. Veterans of the series would easily check it out, others should give it a rent first. Not that I'm saying to steer away from this game, but don't approach it with very high expectations.