The true sequel to Sonic and the Genesis.

The game that Sonic fans have been waiting for. Sonic and the Secret Rings is finally here. Sonic is back in an all new adventure, this time in the books Arabian Nights to save the book, and his world. 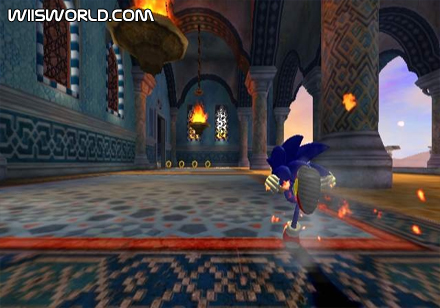 In Sonic's latest adventure, you hold your WiiMote sideways, like a steering wheel. That sounds really stupid, but it works really well. The reason? Sonic is always running forward, starting off slow, then gaining speed gradually. If you want to turn, you just turn the wiimote, to jump you press the 2 button, with the 1 button being used to make the blue blur stop. To do the homing attack you just jump and rush the WiiMote forward.

Multiplayer mode, called "Party" in Secret Rings, is a little different. It's actually just a bunch of MiniGames played in different styles. Theres 8 different characters to choose from and 4 people can play at one time. You choose the place you want to play, each having its own set of rules, like the Party Cruise in Mario Party 7. The MiniGames use the WiiMote near perfectly, with only 1 glitch that I've found so far. You hold your WiiMote in many different styles, like Wario Ware, that's all I'll say for now.

Another thing is that Sonic's ring gains EXP and can level up after enough is gathered, giving Sonic new abilities he won't know any other way. A definite plus. 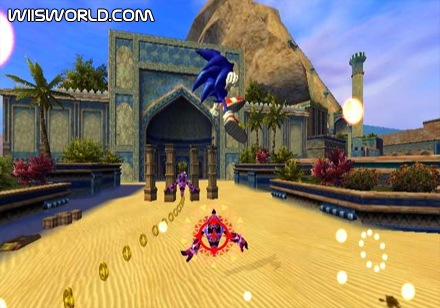 Sonic and the Secret Rings has something that none of the other games have. It's called the "Special Book". In here it has some of the game basics, like the opening movie and BG music, but it also has special things, like history of previous games, characters and so on. But the only way to unlock this stuff is to get different color medals, which is just like A Ranks. The more medals you unlock, and the better they are, the more you'll get. 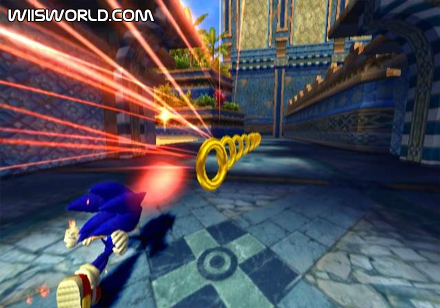 I'm not only saying this because I'm a huge Sonic Fan, but Sonic and the Secret Rings is best looking Sonic game, and Wii game, to date. The only time when anything might be a little blurry is the textures when you're right up on a wall, but with Sonic running continuously, that doesn't happen much. Otherwise, it's beautiful, the water glistens, the sun shines bright, everything is perfect. The only downside, no cutscenes. Everything is played in a story book format.

In previous Sonic games (besides Sonic Rush) everyone always complained the music being too girly. Well no one can complain on this one. If you heard the main theme, you can't forget it. The only problem with any of it is that they still have the same ring sound from previous Sonic games, but I've grown to like it. The background music is as good as the theme, and the voice acting is pretty much top-notch.

Sonic and the Secret Rings is a top notch Wii game, a definitive Wii game, a perfect party game, same single player game you learn to love, with all the missions still intact. You will love this game just as much as you loved Twilight Princess, I recommend it to all.