This dragon has been slain.

Spyro used to be one of the best platformers around. His PS1 games made Mario 64 look like a piece of crap. But after that, Spyro began to suffer the same fate as Mr Crash Bandicoot- new companies began to come in and make Spyro games, but the series was going nowhere. These games were basically the same thing again and again. So also like Crash B, The Spyro formula was changed to be more combat oriented, thus the "Legend of Spyro" trilogy was born. But unlike Crash, the change didn't work so well for Spyro. 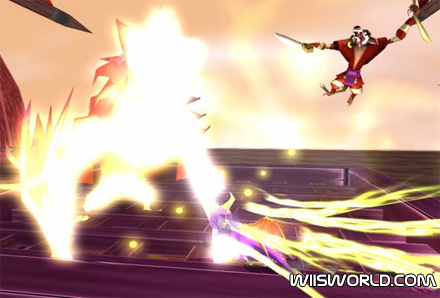 Repetitive. You progress through a linear path, and along the way, you're attacked by enemies and must unleash all your badass new elemental moves to defeat them. Sounds good, right? Well, it was the first few times, but that's pretty much what the entire game consists of. And 90% of the time, it's the same freakin' enemies- evil baboons.

A darn shame considering the Spyro series was once praised for its variety. The fight mechanics themselves are also flawed. The monkeys mercilessly slaughter poor Spyro. It's nearly impossible to recover from an attack since they just keep hitting you.

There are platforming segments on occasion, but not only are they all exactly the same each time, they might as well have been ripped straight out of other games. There is absolutely nothing original about this game.

But developer Krome Studios made this trilogy to tell a story, and they do that quite well. The story picks up where the last game, Legend of Spyro: New Beginning left off. Spyro has to stop Gaul the Ape King from resurrecting the Dark Master. It actually gets very deep and has the voices of Elijah Wood, Billy West and Gary Oldman. But the fact the story is interesting does not excuse the gameplay flaws.

The graphics are average, as is the music. Storyline is the only thing this game really has going for it, and I dunno about you guys, but I don't play a game to read a book. I play it to have a good time, which Spyro: Eternal Night has failed to provide.