Review written by
the console kid

First off, this game is brilliant. It's like gta but better and with awesome controls. If you like gta you must get this. 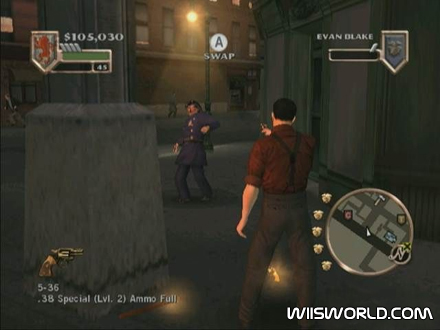 The gameplay is awesome, to fight you simply start of by pressing the z on the numchuck and start swinging. You can grab by pressing and holding the the b trigger, you can choke them by putting the controllers together, you can hit them against walls by pushing them the controllers at the same time and you can do execute by pressing a following the on-screen motion. You control your person by using the analogue stick on the numchuck. You drive cars by pressing the trigger and use the numchuks stick to steer. You climb the ranks and become the of don new york.

Character models are great, the city looks good. The thing that impressed me the most, and this is coming from the owner of a wii, Ps3 and 360 - the explosions are the best I've ever seen. So overall the graphics are some of the best on wii.

A good 30 hours at the least. The whole films plus much more. Finally this is a top game for the wii and now one of my favourites behind Zelda. A must buy.