The Legend of Zelda: Twilight princess is the greatest Zelda game ever without a doubt. It combines the other Zelda games into one and it's like Super Zelda (SZ) =]. It has a great gameplay time. It has an internal gameplay time of about 40 hours (no side quests or anything) but if you do the sidequests and minigames, you could be looking up to 90-100 hours of gameplay!

The Wii-mote's motion sensing is the greatest part of this game. Actually "swinging your sword" makes this game oh so much better. Some of the best aspects of the wii-mote capabilities are the bow and boomerang. The bow is AMAZING because you can actually hear the bow string getting pulled back and plunging into the chest of your enemy. 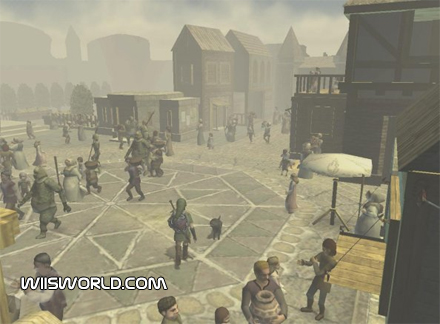 This game starts when Link is a farm-boy herding sheep in a small village. In this village you learn most of the basic controls and have time to get used to the Wii-mote controller. The sweet silent sheep herding soon comes to a stop when great evil comes to take over *ooohhh* *ahhh*. I am not going to say anything about the storyline because I do not want to ruin anything.

The graphics are absolutely STUNNING! The watter ripples, the hair flowing in the wind. The dust flying from under Epona's feet. There is only one downfall with the graphics, the close-ups. The close-up views can get a little blurry at some points, but don't let this bring you down.

The sound is great, the sword slashes coming out of the wii-mote. The bow string stretching out. The only problem, the wii-mote speaker. The speaker is not the highest quality in the world, making some sounds a little fuzzy.

This is the greatest Zelda game ever, anybody who buys a Wii must get it. You will thank me!