Okay, so probably like most of you, I've read the awful ratings that Wii Music has gotten everywhere, and I said to myself "Okay, so it's no Guitar Hero, but it has to have some good qualities in it". So I run up to my local rent place, run back to my home, and pop it in.

First thing that comes up is a narrator, resembling a Muppet and sounding like a mosquito, which may get a smile if he was on for three minutes, but the "Tutorial" lasts fifteen minutes. "Alright, so Nintendo just wants us to know how to play this correctly so we can get more enjoyment out of it". 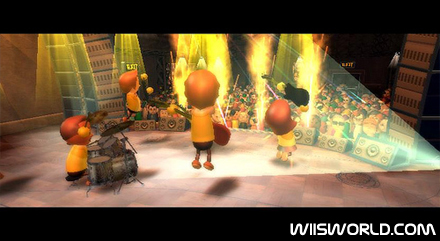 So we get to finally playing music, the first instrument I get to play is the piano. Following the instructions that were given to me in the lengthy tutorial, I proceed to swing the wiimote and nunchuck like a drum (which, I guess, is sorta like playing a piano) in rhythm with the music, and.. well that's it, the music played. No hitting of correct notes by pressing buttons, or moving the wiimote side to side to simulate a long piano, just, swinging the wiimote wildly.

Surely the multiplayer aspect can make up for this sorry excuse of 50$, so I hand off a wiimote to my friend, and we go looking to play the "Mario Theme" that we all heard about. No dice, it seems you have to unlock (meaning play through the god awful game) the good songs that you want to play.

So, we play "Grandfathers clock", and get to pick from an assortment of instruments. Here we go, this is what we were promised, we can just jam out with a lot of instruments and get on our way. On our way to an awful, AWFUL sound that made both my friend and I just look at each other. This "game" uses sounds that my cell phone would blush if it still made. What kind of "music" game downgrades the music aspect?

I can see what they were trying to do. Nintendo was trying to teach song structure. Melody, harmony, percussion, chord, bass etc. But the execution is appalling. It's not fun. It's not thought provoking. What it is, is a sorry excuse that Nintendo tried to get into the "Rock-Band scene" and failed miserably.

There are other aspects to the game that I did not touch on, but it doesn't matter, because this game is god awful. Do not buy this.