This is by no means Pilotwings standard.

What the heck!? I was so chuffed when through my post (from ebay) comes this game Wings, but only after 2 hours of playing it I came to the conclusion it's a pretty awful game.

Some people I've heard on the net say the controls are completely wrong, but I didn't find them too bad. However it would have been nice to use a few functions with the nunchuck more, (plus although as I guess it didn't need it) some better intracrat control. 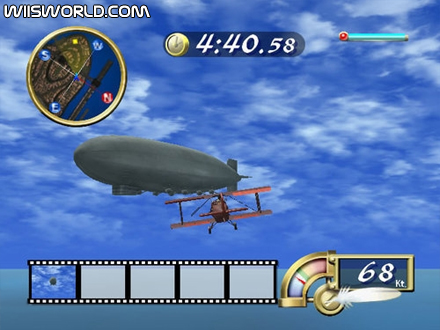 First off the story is really bad, as well as the dodgy banjo kazooie type voiceovers, except banjo kazooie was actually quite tasteful. The graphics look like an original Xbox or GC game! The next problem it seems is you can only ever fly planes, when flying all sorts of things like rocket belts and skydiving would have made things loads better.

Then when you come to doing challenges, well I was getting silver on my first go. Then second time grabbing gold (don't know if there's a platinum but this seems like a game for very inexperienced gamers). The single player was bad and what made the original pilotwings good also was the way you could be judged much more on your performance of landing etc.

Then a huge flaw is the formation flying, the big issue apart from not always getting the squad to do the right maneuver is flying near obstacles (which was fairly crucial when bombing the rocks as an example) you end up not having the room to fly anywhere as they would just fly straight into a rock or something, it's stupid.

The production on the music is quite good in places but I don't think the composition suits the game. However one track has remained with me and I cant stop humming it, (it's the one with the drums over it just a little before you go out and do a mission).

So to conclude, don't buy this game. It's quite boring, I tried to like it but my advice: crack out pilotwings on the N64 again, what a masterpiece!