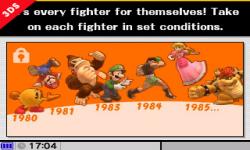 Will have a few subtle changes

One of my personal favorite modes in the Super Smash Bros. series is All-Star Mode. The way it works: you run through a gauntlet, with a single life and limited health items, against the entire roster.

In the past, this mode was only playable after every character was unlocked. However, in the new Smash Bros., All-Star Mode will work differently.

In a recent Miiverse post, by creator Masahiro Sakurai, it was revealed that All-Star Mode will be unlocked from the beginning of the game. There is a catch - you can only fight characters that you have unlocked. So in order to complete the mode, you have to unlock the rest of the roster, which can only be done by beating the main game.

"In these battles, multiple opponents appear in one stage, and you clear the battle by defeating a number of them. The rest area that appears between battles displays the next opponents and the year the characters made their first appearances, and it also holds recovery items and an occasional reward. The characters you fight against appear pretty much in chronological order. Behold, the history of Nintendo games!!"

That is one heck of a history lesson! It's essentially the history of Nintendo characters! Opponents will be displayed, with their original year of release, and will appear in chronological order. So next time someone ask, "What can you learn from video games?" you'll have quite the answer.