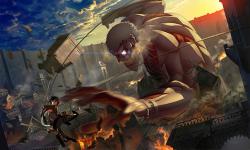 After a tremendous success in Japan upon release, Attack on Titan: The Last Wings of Mankind developer Spike Chunsoft has announced they are currently looking for a publishing partner to release the title in North America.

The game was launched via 3DS in Japan last year, selling almost a quarter of a million physical copies and more through the 3DS eShop.

The game was based on the original manga by Hajime Isayama and was then turned into a hit anime series through Wit Studio and Production I.G..

Will you find titans stomping their way to North America soon? Let's hope so.