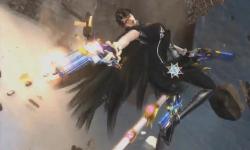 A new Nintendo Direct video confirms some of the exciting new features of the action based Wii U exclusive Bayonetta 2, set to be released Oct. 25 in Australia and New Zealand.

The Special Edition bundle will include the original Bayonetta game along with a packaged version of Bayonetta 2 (SRP AU$79.95). Digital versions of Bayonetta (AU$49.95/NZ$69.95) and Bayonetta 2 (AU$69.95/NZ$89.95) can be purchased on the Nintendo eShop at launch, if both games are purchased, a special discount is given to customers during the purchase of the second game, for a total of AU$79.95/NZ$99.95 for both games.

Join the akimbo pistol wielding protagonist Bayonetta as she embarks on a journey to uncover the entrance to Inferno, the Gates of Hell.

I've got a fever, and the only cure is more dead angels!

This game cost 80 dollars in Australia?! That outrageous! I'll admit I'm a little surprised this game is coming out in Australia, given how strict the rating system is there.