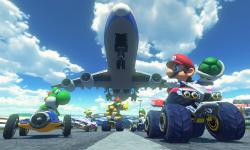 Although there was not much item customization within Mario Kart 7, Mario Kart 8 director Kosuke Yabuki explained to IGN that the upcoming Mario Kart will have this idea expanded on.

An important factor to the game that Mario Kart 8 producer Hideki Konno explained is the item balance within the races. He explains however that the feeling that players get of having control over items will be addressed in the new Mario Kart. If a person decides they don't want items in their race then there does not have to be items. If someone feels like they only want bananas, those kinds of preferences can also be adjusted.

Players are also said to be able to set up their own rules, of course with the balance of a few items that are available to players by default.

Game balance is a really important element of Mario Kart that we look very, very closely at and place a lot of value on.

Konno explains that the team puts a great emphasis on the adjustment and thought process that go into their games. Item balance is something that the developers work on many times, and he hopes that people would want to play with the items as they balance them.

Konno says that the main purpose is that even when players have an off day and may lose some races, he hopes that when they step away, they will want to come back to play the game again.