GameStop will be hosting Super Smash Bros. Brawl tournaments at 2,500 of its stores across the US (includes EB Games).

It all kicks off on March 8th (i.e tomorrow). Store winners will progress to district tourneys on March 15th. Winners of those go on to a brawl in San Jose on March 29th. The winners there will go all around the world, devoting their lives to the art of brawl. I made that last bit up, San Jose is the final.

The grand prize is pretty awesome:

I'm not sure if this part is genuine, but some reports say this is the GameStop SSBB trophy the eventual winner will get: 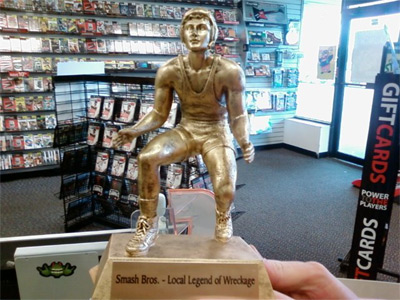 Did they cheap out?

If true, that's hilarious. Beneath that plaque it probably says "Junior Wrestling Champ 1984".

Wow I doubt that is the trophy.

Man, that trophy is lame. The REAL trophy is probably Mario.

Lol ya I'm a wrestler and that's definitely a wrestling trophy.

Brawl releases on Sunday! Can't wait! I preordered it.

Looks pretty dumb if you ask me. Still, it's great the game will REALLY be on sale this Sunday. I called them up and they told me.

I'll BUY that awesome trophy off them.

Horrible trophy but the fact that it's a brawl tournament makes up for it (too bad I'm not in it). A real trophy should be either one of the smash bros symbol or a trophy of the character the winner of the brawl used.

If I could be in the tournament, I would choose Mario.

They should make the losers take the trophy.

Tomorrow? Wiisworld, it's at 12:01 am, which is Sunday, when everyone gets the game. There will be more local tournaments, so don't sweat it peeps. We'll get our Brawls. Anyway, by that time, I won't really care. Yes, it is a dumb idea.

If that was the real trophy, I'd likely melt it down and pour it on some hapless fool who I didn't like. The rest of the prizes, thumbs up. I see promise in this tourney.

I preordered it twice, and joined a tourney.

Oh man. I must WIN for I am a Smash Bros god.

What is a Wii library? Is it all the Wii games ever made?

If that is the real trophy, it will be mine when I win the tournament.

I can't go when this happens *cry*.

Bad trophy! But I will be in the tournament just for fun and pick my game up tonight, because my store is having a midnight release party for the game, party and a tourney.

Yeah, I seriously doubt that trophy. It does probably say exactly what you just said.

Dang, brawl comes out tomorrow. It's been forever since it's been announced, and it's finally here.

Is the Wii game library all Wii games or what?

That's cool, but I reserved it at gamecrazy, but are still having a tournament, not as big though but whatever.

About an hour away from when the GameStop opens around here! Then, we wait another hour before they can sell it (it opens at 11 PM). Too bad there's not a branch of the tournament in my neck of the woods. That trophy is hilarious.

This is sad I won't be playing monday.

I just came from the gamestop tournament. I got second place. Would have got first but they don't let you use the gamecube controller. You have to use the Wiimote. Great game, so much fun. And YES that is the trophy, pretty pathetic. Gamestop could have done better.

Ooh, I used to live in San Jose. Very interesting. But man! Those cheap bastards copped out on the trophy! It's not like they have a shortage of funds or anything. Can't say any of those prizes interest me. Well, except the $5000 of course.

My friend won the local store competition and that's the REAL TROPHY they give out.

That is the real trophy? What, was the trophy store out of boxers?

No that's the trophy, my good bud won it.

I won the tournament on Saturday, and yes that is the trophy.

I lost the tournament, I was someone I suck with, Lucas.

That's quite a prize.

I won but I got a silver one, mine wasn't even gold. My store must have been even more cheap.