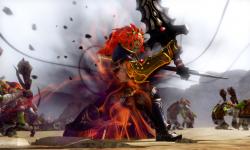 Ganondorf, The Demon King in the Legend of Zelda series and arch-nemesis of Link, has officially been confirmed as a playable character in the Hyrule Warriors game, which launches Sept. 26 for the Wii U home console. The news was released by Nintendo during a special Hyrule Warriors-themed Nintendo Direct video.

Soon players will finally be able to play as the dual wielding Big Bad of the series with long luscious blood red locks, and a demon edge of a sword to match. Players will also have the chance to play in the New Adventure Mode, along with new pick-ups and locations.

Ganon is definitely a force to be reckoned with this September.