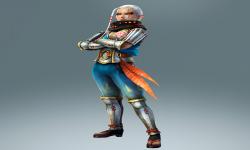 That is a big sword!

It appears as if these Hyrule Warriors updates will be coming on a daily basis now that the Japanese release date is approaching.

Today, Tecmo Koei released a trailer showcasing Impa and her massive sword. The first thing I notice in the trailer is Impa's slower rate of attack, as compared to Link. This lethargic nature is compensated for by having a larger area of effect with each attack. The attacks are still fantastical, as is expected from this game, but at least it is good to know that there will be some difference between the various characters.

Let me know what you think in the comments below! Don't forget to follow us on Twitter for all the latest Nintendo news and reviews - @WiisWorld and @dozemaster5000!