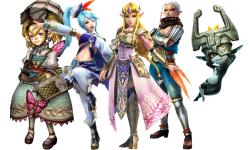 and I love it!

While there are other developers who make excuses for not including female playable characters (looking at you, Assassin's Creed: Unity), the team behind Hyrule Warriors is doing the exact opposite; as of today, there are five playable female characters in the upcoming Wii U title. Granted, while there is still time to fill in the rest of the roster (the character select screen in the E3 demo featured seven empty character choices, making a total of nine), Hyrule Warriors may be the first triple-A Nintendo title to have a playable cast that's predominantly female.

Nintendo has a decent track record of keeping their games gender-inclusive. It was 1988 when Super Mario Bros. 2 let us all save the (dream) world as the once and again damsel in distress Princess Peach. Mario Kart and Super Smash Bros. titles all have a varied and interesting cast of male and female characters, and let's not forget Samus, the videogame world's first true heroine (not counting Miss Pacman, because eating dots isn't exactly heroic.) However, Hyrule Warriors presents Wii U owners with an interesting, colorful cast of playable women in a way that is unprecedented in the world of Nintendo, and could be an accurate representation of the big N's continued forward thinking.

We can't give all the credit to the house of Mario for this feat of gender inclusivity. Tecmo-Koei, whether under the watchful eye of Legend of Zelda producer Eiji Aonuma or due to their own maturing, has contributed in creating a robust roster of female protagonists that have distinct personalities and strengths. Hyrule Warriors can be seen as a creative turning point for the company; a quick google image search of another Tecmo-Koei produced title, Dead or Alive, will return pages upon pages of the scantily clad female fighters that the series is famous for. While there are plenty of playable women on the DOA roster, their distinctions lie more or less in their sex appeal, which presents a challenge for the player, boy or girl, to meaningfully relate to them. While I understand that Dead or Alive is a different game, I'm very pleased to see that bust size doesn't play an important role in Tecmo-Koei's character design any longer, at least for Hyrule Warriors.

I'd like to close by saying that this post isn't necessarily philosophically feminist, and that including more playable female characters is not a feminist move on a developer's part. To create playable characters that players can learn from and relate to fosters empathy and breaks down stereotypes, whether those stereotypes are about race, creed, gender or sexuality. Good character design engages and motivates players, and that's what the team behind Hyrule Warriors is doing so well; they are creating an interesting and fun-to-play character roster that is not defined or dominated by gender-specific characteristics, but by gender-neutral, human characteristics.