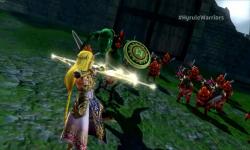 Queen Zelda and her bow!

The trailers just keep on coming! For a third day in a row, we have received a new trailer for Hyrule Warriors. Today's daily dose of kickass is served up by none other than Zelda herself.

The trailer begins with Zelda summoning her sword, but as you watch, it becomes apparent that close-range melee damage is not what Zelda is about. Unlike Link and Impa, the two characters we have had trailers for so far, Zelda is much more ranged in her attacks, choosing to us her bow for both direct and ranged attacks. This change is the type of character diversification that we have been hoping to see in Hyrule Warriors.

Let us know how excited you are for this game in the comments below! Signing up is quick and easy. Also, don't forget to follow us on Twitter @WiisWorld and @dozemaster5000!