In an effort to boost awareness of Mario's latest adventure in the UK, Nintendo have set up a promotion where a gigantic 150ft image is beamed onto the face of Battersea Power Station, a well known building in London. 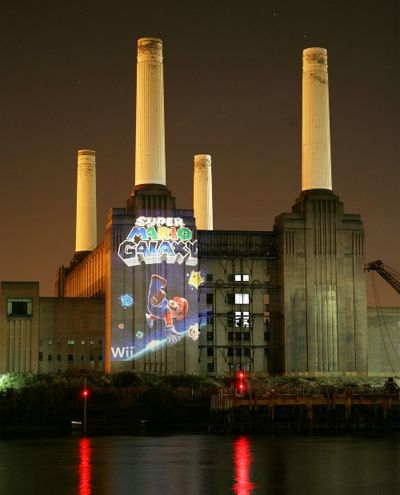 "Mario-mania is huge and yesterday we proved it by beaming a giant image onto one of London's iconic landmarks. We expect the release of Super Mario Galaxy to help break the 200 million franchise barrier".

Wii demand is fervent across the UK, where it's increasingly hard to find the console in stock at retail. Super Mario Galaxy releases tomorrow, November 16th.

That's amazing! I wish I could see that for myself. Hoping to play Mario Galaxy tomorrow.

Oh my god it's coming out tomorrow, I'm so excited.

Already got my copy here in the UK and it freakin rocks.

It wasn't hard for me to get super mario galaxy.

Jeez, that's so cool. I wish I could have seen it live. Super Mario Galaxy rules.

Hey, anyone else notice "Super Mario Galaxy" no longer has the stars underneath the letters U, R, M, R, G, A, Y?

To those of you in UK, good luck getting the game. Going to pray for ya to get this amazing game.

Galaxy is so awesome. And you can play as Luigi after you get all of the Power Stars. I have to admit, for a Mario adventure game, the bosses are pretty tough. If you have the game and are as far as the Bedroom dome, try the Bouldergeist Boss with a Daredevil comet there. Trust me, you will get frustrated.

Nintendoof, ya that's what I thought at first, that was going to be one tough boss battle. But I took it slow and calm, did it my first try. I was really surprised, I feel they really toned the game down a lot. I'm still in the bedroom and just about have the required 60 stars to beat bowser. Games over the generations have gone from amazingly hard to pretty simple.