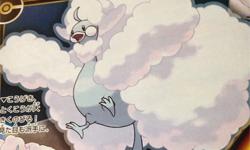 Because everyone was clamoring for more Lopunny

In a recent publication of Japanese gaming magazine CoroCoro, Mega Evolutions for Altaria, Salamence, and the rabbit-esque abomination that is Lopunny have all been confirmed for the upcoming remake of Pokemon Ruby and Sapphire.

Mega Altaria will be a Dragon/Fairy type, have increased attack, a greater height, no shift in weight, and have the ability Pixilate, which causes all normal moves the Pokemon uses to become Fairy types, along with receiving a 30% boost to their power.

Mega Salamence will be a Dragon/Flying type, increase in Defense, become both taller and heavier, and have the ability Aerilate.

Mega Lopunny will be Normal/Fighting, have boosted Sp. Attack, increase in height but drastically decrease in weight, have the ability Scrappy, and will likely be ignored because nobody, to my knowledge, goes out of their way to catch a Buneary.

"Hulk Hogan is the Deification of the Metatron." - Patrick Boivin