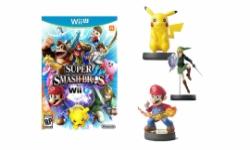 Bundle will include Wii U version and three amiibo figures

According to a recent Walmart listing, it seems Nintendo is releasing a Super Smash Bros. Wii U / amiibo starter bundle this upcoming holiday season.

The bundle will include a copy of the Wii U game and three figurines (Mario, Link, and Pikachu).

This bundle costs $99 USD, and is now available for pre-order.