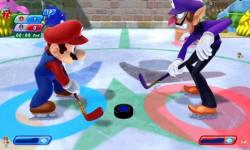 Lots of Mario and Lots of Sonic

In case you have had a very busy weekend and were unable to catch the latest Nintendo Direct this past Friday, then Wii's World has all the details for you. Satoru Iwata gave updates on known games in development, unveiled some new ones.

Mr. Iwata started off by announcing that SEGA is currently working on a new entry in the Mario & Sonic at the Olympic Games series for the Wii U. This installment will be based on the 2014 Winter Olympics, taking place in Sochi, Russia. Mr. Iwata gave a quick geography lesson on Sochi, and also put an emphasis on the game's HD graphics.

The characters are detailed and environment effects such as snow and ice are realistically presented.

He followed this up by saying that Nintendo and SEGA have started a partnership on the Sonic the Hedgehog franchise, and a new main series entry entitled Sonic Lost World will be coming exclusively to Wii U and 3DS.

On a side note, another SEGA title, Yakuza 1 & 2 HD Collection, was announced for Wii U in the Japanese Direct. It was not mentioned in the European or SEGA will also be putting out more Game Gear games onto the 3DS eShop, including Dr. Robotnik's Mean Bean Machine and Columns.

Rodrigo went on to talk about games coming out this summer, including Animal Crossing: New Leaf and Resident Evil: Revelations, but gave no new information on any of them.

When Mr. Iwata returned, he gave some brand new information on New Super Luigi U, the DLC for New Super Mario Bros. U He confirmed that there will still be multiplayer, and so the blue and yellow Toads will be returning. Since Mario is not a player character in this game, the fourth multiplayer slot has been taken by Nabbit, the purple rabbit thief from the overworld of Mario U. Unlike the other characters, he cannot be damaged by enemies. Due to this, he is also unable to pick up any powerups. Another piece of news on Luigi U given was that there will be a limited edition physical release of the game. That will be available on August 25, as opposed to the digital version, which will be purchasable on June 20.

Iwata then transitioned to some new information about Pikmin 3, including the names of the three new playable captains: Alph, Brittany, and Charlie. They have been stranded on an exotic planet and must work with the Pikmin to find fruit which they can use to make juice to survive. The biggest information Iwata gave on the game was that it will get rid of the time limit system found in the previous Pikmin games.

Lastly, Reggie Fils-Aime came on to talk about this year's E3.

This year, it's all about the games.

He then revealed that Nintendo has partnered with Best Buy to put all the E3 demos Nintendo will have on the show floor available at Best Buy stores for people to play for free.

That's all the news that this Direct brought. What excites you the most?