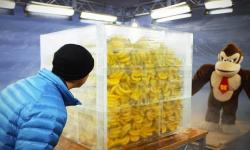 Nintendo of Canada recently held a contest for its fans to celebrate the release of its new Wii U game Donkey Kong Country: Tropical Breeze.

Thousands of bananas were frozen inside a gigantic block of ice made by a warehouse in Vancouver, in order to promote the release of the new game. Contestants were asked to observe and guess how many of the yellow fruit were stuck inside.

One lucky contestant was able to win a 4-day vacation to Whistler and received a Wii U gift set featuring Tropical Breeze by guessing that there were 4,835 bananas inside the block of ice.

After the winner of the contest was announced, Nintendo had the bananas donated to the Greater Vancouver Food Bank Society, a non-profit organization that assists over 28,000 people a week.