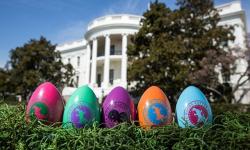 Get Up and Play!

Yesterday, Nintendo made their way to the White House where they joined the National Park Foundation to play video games for the Easter Egg Roll event.

The event took place on the south lawn of the White House where games such as Wii Fit U and Wii Sports Club were available for visitors to play.

Being that these games require players to get up and move, they fit right into theme of the event which was "Hop into healthy, swing into shape" in hopes of improving the health and activity of all families. The games were also a great support for the First Lady's Let's Move! campaign, which also focuses on the health of children as they grow up.

Mario and Luigi were also to make their appearance at the event taking pictures and cheering on the visitors as they played the games.

The event was a great success and having Nintendo there definitely kept the visitors and families active the entire day.