No Plans for Star Wars to Appear on Disney Infinity 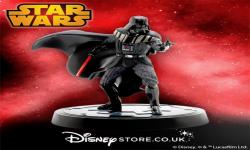 With all the excitement of Marvel becoming a part of the Disney Infinity family, rumors have recently been spreading about whether Disney plans to include Star Wars characters within the game as well.

The rumor started with the Disney Store posting a Darth Vader figurine on their official company Facebook page. The figurine highly resembles those used for the Disney Infinity game which then caused rumors to quickly spread and stir up all the excitement.

Disney eventually cleared the rumor by stating that they do not have any current plans at this time in including Star Wars characters in the game.

With the Disney Infinity character lineup continually growing, one cannot help but hope that Star Wars will be incorporated into the game. As of now however, players just have the excitement of the new Marvel character lineup coming to the game, which will be released in a press conference on April 30th.