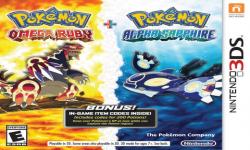 Why choose, when you can have both

It looks like it just got much easier for Pokemon fans to catch 'em all this holiday season. Nintendo has announced a dual pack which will allow fans to buy Pokemon: Omega Ruby & Alpha Sapphire at once!

This pack is only available at Best Buy, and will retail for $79.98. Also included with the games are a pair of download codes, which grant players an additional "100 potion items for both versions". The dual pack will be released on November 21 (just in time for the holiday shopping season).

So readers, do you think this a good move by Nintendo? How many of you plan to buy this pack? Let us know in the comments below.