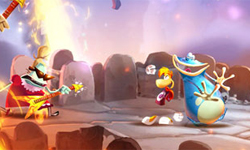 Walking into my nearest Gamestop I cautiously approached the playable Wii U booth. After playing around with the system for a bit I came across the Rayman Legends demo.

As a fan of the previous Rayman reboot, I gave a quick smirk and was on my way to playing one of the best demos I have ever experienced. After just one of Rayman's artfully crafted, insanely fun levels I needed to play more. I called my brother over who was with me at the time and we just had a complete blast. We took turns trading between the Wii Remote and the Wii U GamePad.

There are 3 levels available to try, each with unique play styles. One level plays in traditional Rayman Orgins style having players run, jump and collect fairy type creatures - the game's version of currency.

Another level offers a chase sequence while the tune of Black Betty (sung in Rayman style) is conducted as players hit certain areas of the level. This is insanely fun and I can't wait for more.

The last level also plays out in a more traditional style, but the player using the GamePad controls a flying creature to aide you along the level. This involves stunning enemies by tapping them or rubbing them. Other variations in gameplay include lifting, shifting and spinning platforms. All of this works wonderfully and my brother and I could not wait to take turns.

There is no good reason not to play this demo. Nintendo allows 30 playthroughs of demos and I am already halfway done with them. I'm just going to say this flat out - this game is the reason that I originally made the decision to buy a Wii U and will definitely be a day one purchase for me.