Nintendo held a cocktail reception last night in which around a dozen participants went up against NoA's President Reggie Fils-Aime in Wii Sports tennis.

By all accounts Reggie was a demon at the game and beat everyone, including several professional gamers and members of the IGN staff. 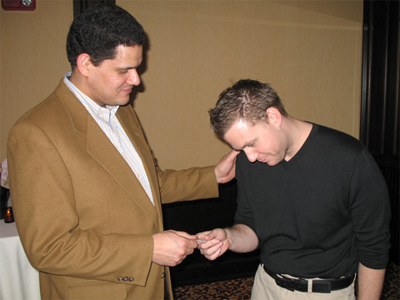 What a last name.

Haha like the joke they made about Casa's last name. Reggie FTW!

He's the president of Nintendo of America, so he has to be the best, hehe! Damn, that last name is long.

Go reggie! I bet I could beat him.

Casa. Massa. Ssass. Ina! Wow! What is he giving him anyway?

That is a bizare last name.

Matt is not worthy to even look the Regginator in the eye much less stand in his consecrated aura. He looks like an emasculated jester begging for scraps from his royal highness.

Oh Regginator, your glory glows like an super saiyan 3.

I guess if you are the president, you would have a lot of experience.

That's exactly what he said a while ago, Spoonard. Maybe it's Matt's business card.