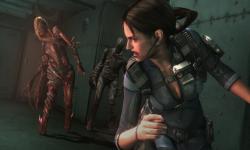 The title was officially confirmed at a Sony press conference with Capcom revealing the system listing in a separate release. The listing confirmed current and next gen systems, as well as PC. However, Capcom felt Nintendo hardware was not relevant enough to warrant a release!

As a big Resident Evil fan, this is very frustrating news to hear. I'm sure others feel the same. Revelations was one of the best Resident Evil games! It was easily one of the best 3DS games! Seriously, that was the game that made me want to buy a 3DS! It doesn't help that this news comes on the heels of the announcement that the Resident Evil remake, which was a GameCube exclusive, upcoming HD port is also skipping Nintendo systems.

So Nintendo fans, it looks like we'll have to find some other way to get are zombie slaying, unless Capcom suddenly has a change of heart, but I wouldn't hold my breath.

I love resident of 4