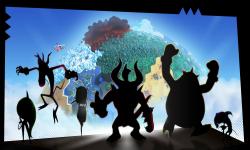 An image about the recently revealed Wii U and 3DS exclusive Sonic game, Sonic Lost World, has been uploaded today onto the official Sonic the Hedgehog Facebook page. The picture (right) shows six silhouetted creatures.

According to rumors from last week, this image was actually leaked on the Sonic Facebook page earlier, and said that these characters are the six guardians of the Lost World.

It has yet to be seen if this is really who these characters are and whether they stand with or against Sonic, but the official SEGA post says that they will be revealed on May 29th.