Splatoon Was Nearly a Mario Game 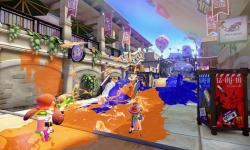 One of Nintendo's pleasant surprises at this year's E3 was Splatoon. The game takes the squad-based shooter template and puts a Nintendo spin on it. It's also a breath of fresh air in that it's a new IP (something Nintendo desperately needs). However, the game was nearly a Mario spin-off.

There were heated debates over who the main player character should be. Whether it should be Mario, or a squid. When we talked about the possibility of it being Mario, of course we could think of the advantages: anybody would be willing to touch it as soon as we announced that we had the new Mario game. But at the same time, we had some worries. If it were Mario, we wouldn't be able to create any new IP.

Now I can see Miyamoto's reasoning for wanting to use Mario in a new game like Splatoon. Nintendo has done that throughout the years, putting Mario into new IPs like Mario Party, Paper Mario, and Mario Strikers etc. Having Mario in a game makes people much more willing to buy it. In the end, the idea of creating a new IP with new characters won out.

Personally, I'm glad Nintendo is going out of their comfort zone and switching things up.