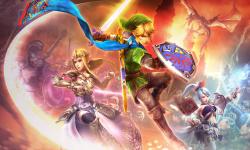 Wii U benefits from Gamescom

Here's a fair observation: It's been nothing short of a roller-coaster week for Nintendo.

First off, game studio Ubisoft publicly announced that it will no longer be releasing mature-rated games for the Wii U after Watch Dogs, because they don't sell. Secondly, Activision said the next installment in its Call Of Duty series will be skipping the Wii U.

While those two bits of news are bad, there's a silver lining for Nintendo: Wii U games benefited the most from this year's Gamescom. Ironically, Nintendo was the only one of the major console manufactures not to have a stage show at this year's event.

All the nice people at Amazon have crunched their sales figures, as reported by MCV, and revealed that Wii U games saw the largest percentage increase in preorders following Gamescom, with an 8.67 percent rise. Meanwhile, PlayStation 4 game preorders rose 5.16 per cent, and Xbox One games only rose by 2.81 percent.

The Wii U games that had the biggest increase in their preorders were Hyrule Warriors and Super Smash Brothers.

Maybe Wii U preorders spiked so much because they were coming from a low baseline, but it's still a step in the right direction.