Wii U Owners Frustrated Over Low Stock for Bayonetta 2 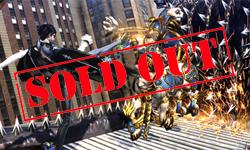 This witch is proving elusive for gamers

Bayonetta 2 has now arrived stateside and many Wii U owners are rushing out to grab the high octane action game. However, many gamers are reportedly having problems finding it.

Over this past weekend Wii U owners took to social media to express their frustration over the game's lack of availability at retailers. Complaints of low stock orders, unfilled pre-orders, and stores not even being aware that the game was released seem be a reoccurring thing, according to the post. So what does this all mean?

Some people have suspected that many retailers are not stocking the game since it is a Wii U exclusive, and they don't expect to make a profit. Others think that Nintendo is unsure of how the game will sell and is testing the waters before a mass release (which is understandable, given how the games sales in Japan were less than spectacular). One could also make the case that Nintendo is holding copies on purpose in hopes of releasing them during the holiday shopping time.

There are allegations that Nintendo is using this game to push its eShop download service - making it the easiest place to get the game. It's also important to note: this is not just a problem for American gamers, many European gamers also stated problems in acquiring the game.

I do hope that this problem gets solved soon, because Bayonetta 2 is, in my opinion, the best Wii U game (and one of the best on any console), and deserves a place in anyone's collection.