Wario's Woods is a puzzle game in which Toad piles up falling creatures and bombs in order to make them all disappear, collect gold coins and reach the next level. Setting up chain reactions is a very effective strategy to go far in this game.

Several supporting characters of the Mario series make guest appearances. The NES version of Wario's Woods is mostly remembered for being the last NES game officially released in the West. Although less known than other puzzle games from Nintendo such as Dr. Mario and Tetris Attack, Wario's Woods can become quite addictive and is definitely worth a try for puzzle fans.

Wario's Woods has no review on Wii's World. Write a review 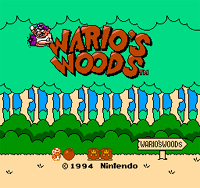 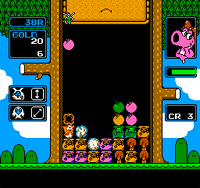 Hmmm never heard of it.

Most people never heard of it because it is a rare game for NES. But lucky, you can get it on Wii and Animal Crossing for Gamecube. I already have Animal Crossing but I'm still playing it!

Never heard of it ether!

No one has heard of it because this was a very late release for the nes, by 1994 the snes was 4 years into it's reign with the 16-bit wars between the genesis and the turbo grafx 16 which conquered in japan as the pcengine, a country who knows real gaming.

I like this game, but I'd rather play the SNES version.

How do you get it in AC?

Yeah, I had the SNES version too. In this one, you can play as a green toad in multiplayer. And there's a lot more bosses.

This was the last game for the nes.

Was this warios first game?

No, his first appearance was Super Mario Land 2: 6 Golden Coins. He was the villain of that game, and this one as well. SML2 came out 2 years before this. But I don't know why Toad was the main hero of this game. It could've (or should've) been Mario.

Oh let toad be the hero.

I guess Toad does deserve to have a starring role, but with Wario as the villain, seems kind of weird. They should make a DS or Wii adventure about Toad. Toad was my late-mom's favorite Mario character.

How everyone copies tetris?

Wii Freak, this is different from Tetris.

This also came out for the SNES. It goes to level 255 (yes, it is possible to do this without cheating) and then keeps repeating itself. Level 100 you beat the game.