Published by Jaleco, Developed by -

In my opinion Nintendo has really been missing a lot of opportunities with the Virtual Console platform - where are all the Zelda, Mario and Metroid games? The money used to convert these titles could easily be made back in a week and there shouldn't be any licensing fees on first party titles, but until Nintendo figures out how to make money and just release the titles people are nostalgic for, we are stuck with the games that almost no one remembers.

For example, Avenging Spirit. While I'll admit I am obviously slightly upset with Nintendo's poor Virtual Console lineup, I am certainly glad Avenging Spirit is one of the few games they chose. 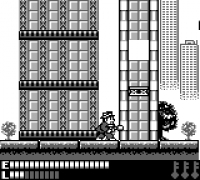 In Avenging Spirit you play as a ghost summoned by a scientist in order to rescue his kidnapped daughter. The game plays like a fairly straight forward side-scroller except as a ghost you can only survive for a few seconds exposed to the outside world. In order to survive you must possess the very people you are fighting, each of them controls a little differently and has a unique attack.

Your opponents range from agile ninjas who throw shuriken to bikini-clad women with deadly kicks, as well as prohibition era gangsters with guns.. only to name a few. This fairly impressive lineup of playable characters means that you can tackle the same few levels over and over again while getting a new experience each time. Why this strange cast of rogues all battle you in tandem is unknown.

Honestly, I'm kind of surprised the artists were able do so much on the original Game Boy's tiny, black and white screen. Even with its limitations, Avenging Spirit's characters all have a clearly identifiable silhouette that makes them easily distinguishable at a glance.

I'm really not sure of what I should say other than the game is great. For only a few dollars you can get a truly original experience years ahead of its time on your portable system.