Trine 2 is a sidescrolling game of action, puzzles and platforming. You play as one of the Three Heroes who make their way through dangers untold in a fantastical fairytale world. The game features an exciting adventure full of action, including physics-based puzzles using fire, water, gravity and magic; wicked goblins on a quest to ruin the kingdom for good; and a magical environment full of wonder.

For the first time in the series, Trine 2 introduces online cooperative multiplayer support for up to three players, alongside the local multiplayer mode.

The upcoming new expansion campaign, Trine 2: The Goblin Menace, will also be released on the Wii U at launch as a console exclusive.

Trine 2: Director's Cut has no review on Wii's World. Write a review 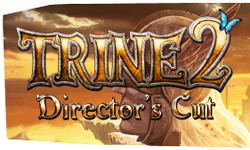 Trine 2: Director's Cut new trailer
Trine 2 may have released on other platforms last year, but the Director's Cut is brand new and exclusive to Wii U - complete with the...