Toki Tori 2 is a puzzle adventure game for Wii U. The game gives players two moves, the whistle and the stomp, with which they can manipulate the behavior of the creatures that inhabit the game world.

Its design gives players the freedom to figure everything out for themselves and have fun in the process. Instead of telling players what to do and where to go, we think facilitating exploration and experimentation makes for a far more rewarding experience. We don?t use tutorials or text screens, there is no text at all in the game. Who reads that anyway?

The game's Metroidvania style open world opens up because players learn more about the world and its creatures, not because we hand out more moves or items. This means inquisitive players can go anywhere right from the start while less experienced players can simply follow the game's flow and build up their arsenal of knowledge on their own terms.

The game's story is told through interactive in-game story advancing sections, which never take away control from the player. While progressing through the game, the story will slowly unfold and will show the true potential of our unlikely chicken hero Toki Tori.

Toki Tori 2 is a pure and wondrous new puzzle game for the Wii U eShop. Thanks to developer Two Tribes' presentation and approach to gameplay, Toki Tori 2 turns out to be a fun, unique and at times challenging experience that will surprise Wii U gamers of all ages. Players...read full review 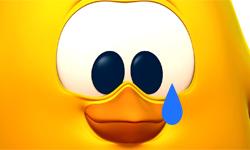 No chance of Toki Tori 3
If you were still holding on to faint hopes of there being another Toki Tori game, publishers Two Tribes have just dashed them with a...

Toki Tori 2 is ready!
Exciting news for puzzle fans, Two Tribes Games has announced that after a year and a half of development time, Toki Tori 2 is complete. It...

Two Tribes delays Toki Tori 2
Bad news for anyone who has been looking forward to Toki Tori 2 on Wii U eShop - the game won't be making its intended launch date of...

Toki Tori 2 release date announced
If like me, you're looking forward to Toki Tori 2 hitting the Wii U eShop, you'll want to know its release date. Courtesy of a...

Two Tribes want new logo feedback
Dutch developers Two Tribes are tweeting the community to ask for feedback. They weren't entirely happy with the logo of their Wii U eShop...

Toki Tori 2 level editor is go
Amidst all the news from the various presentations, another cool piece of news also quietly surfaced. When the Wii U's eShop is up and...

Toki Tori 2 level editor
Just a small tidbit of info for those of us who are excited for Toki Tori 2. According to Two Tribes' twitter stream earlier today, a level...

Toki Tori 2 screens and teaser
Toki Tori 2, the long awaited sequel to Toki Tori is under development by Two Tribes. Here is a teaser video and some...

Toki Tori 2 coming
Developers Two Tribes recently put out a press release announcing that a sequel to Toki Tori is in the works. Great news for all us TT fans...