Published by Zen, Developed by -

CastleStorm, a two-dimensional tower defense game, is very engaging and surprising at every turn. Though Zen Studios is typically known for pinball titles, this game allows players to utilize a ballista to hurl projectiles at their enemies. CastleStorm was released December, 26th 2013 for about $10 on the Nintendo eShop.

As the name suggests, this title is set in a fantasy medieval landscape. The player controls a ballista to hurl, stones, spears, morning stars, boars and sheep (yes, you read that right) at an enemy castle in an Angry Birds fashion. As well as launching projectiles at an opponent's castle, a person can also release soldiers from the castle to pester the enemy or counter their forces. To win, a player can break down the gates to capture the flag or completely destroy the enemy castle. Along with generic swordsmen, archers and cavaliers, players can warp in heroes, which are controlled directly. This gives an advantage in case the enemy releases a large number of troops. 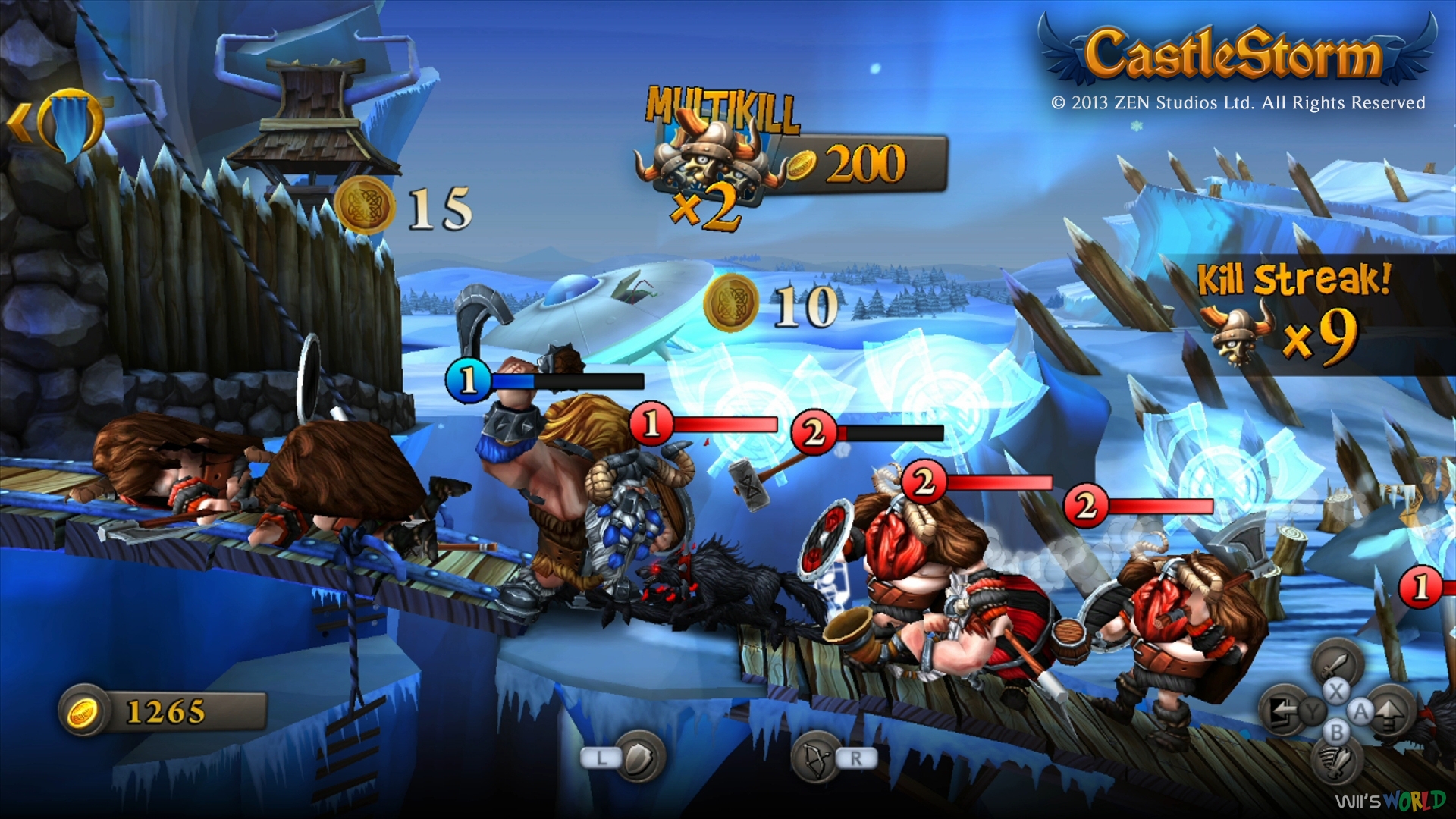 The main story is rather silly, often employing stereotypical fantasy elements. However, it is enjoyable enough as long as no deep, thought-provoking experience is expected. The main plot involves two factions that were warring for years before the world's deities stepped in. After enjoying peace, the wars are beginning anew in this game.

CastleStorm takes some time to get used to, but it is worth the effort. Its biggest strength is the impressive amount of content and customization. You need to simultaneously send out troops to defend the castle, utilize the best weapons against the opposing castle, and find the best overall attack strategy. Weapons, troops and rooms can be leveled up, castles can be rearranged, and the available classes of troops can be changed.

The controls are very touchy in the game and can take a bit of time to get accustomed to. The ballista is probably the most difficult to master. It often takes very little correction of the left joystick to move the weapon. It took me some time to learn how to control the hero. I was expecting the 'A' or 'B' buttons to execute the main attacks, but the 'X ' button carries this function, which seemed odd to me. However, that is a minor issue. In single player mode the GamePad is not utilized in any special way unless you want to play without the TV. This was disappointing but not horribly unexpected. 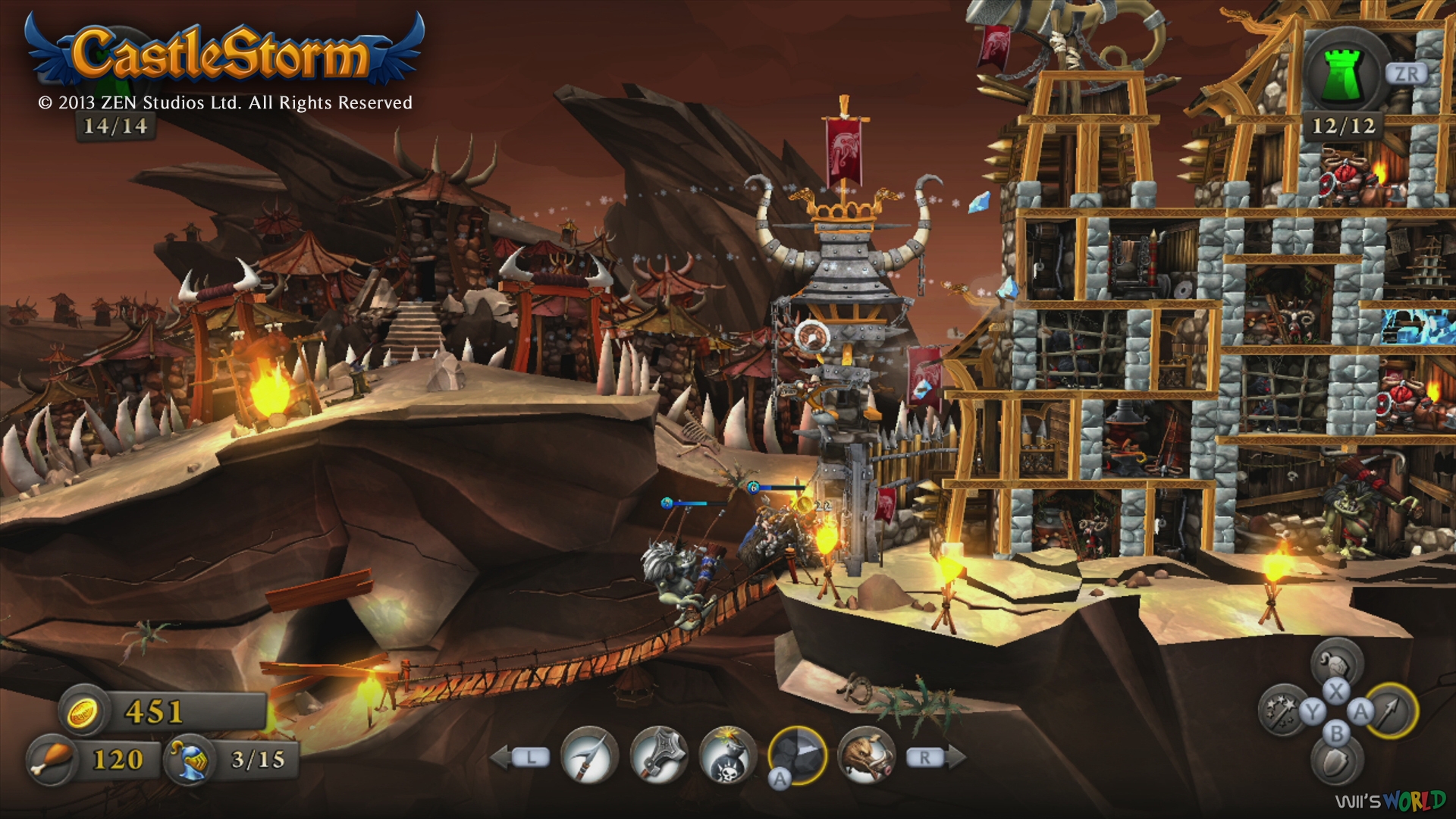 Multiplayer mode has several options: versus, survival and hero modes. Versus mode allows for two players to attack each other's castles. Survival and hero modes let two players team up against a common foe. In survival mode, player one controls the ballista and player two controls a hero which can re-spawn if killed. Hero mode allows both players to use heroes to fight waves of enemies. Please note that local multiplayer requires the Wii U Pro Controller.

CastleStorm is definitely worth the price and provides hours of entertainment in both single player and multiplayer modes. It has the simple, addicting charm of Angry Birds while offering new dynamics to the tower defense genre. Once the controls are learned, this game is fun and full of content. Overall, CastleStorm is a fine experience that can be even more enjoyable when played with another person.