Ice Cream Surfer is a horizontal scrolling shoot 'em up from the days of old. It tries to capture the classic arcade gameplay of titles such as Gradius while adding its own personal touch, but unfortunately what we end up with is a rather lackluster attempt.

The first thing you'll notice are the graphics; Ice Cream Surfer sports a rather classy retro look. Colors are bright and vibrant, and the sprite artwork is very well done. The character and enemy design is pretty quirky, as you'll be playing as a little boy who, obviously, surfs on a giant ice cream cone while fighting off giant mutant broccoli monsters, giant cakes, giant fireballs, seals with glasses, and so forth. You get the idea. Ice Cream Surfer is silly and it's not afraid to flaunt it, giving the game a very unique look and personality. Seeing how there's a gallery that lets you look at various pieces of concept art, I did some digging around and found out that Ice Cream Surfer actually started as a web comic, which makes sense! 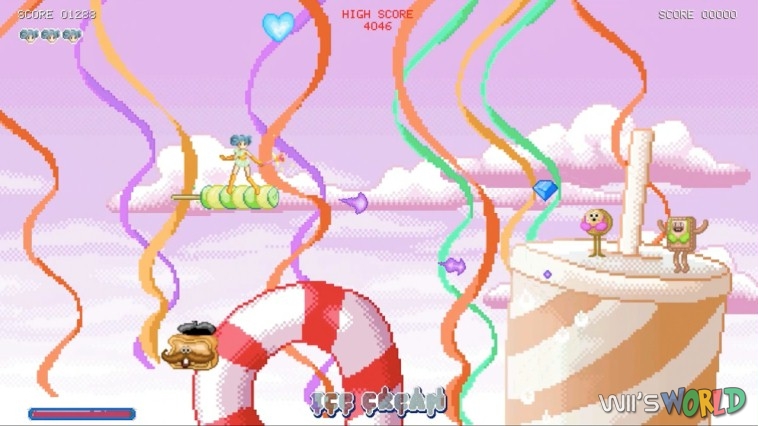 The story, as you can probably expect, is just as offbeat. The diabolical broccoli monsters - yes, you heard that right - plan to conquer the world because they're upset that kids love ice cream and not vegetables. That's it. Seriously, that's it, and appropriately so. It's a shoot 'em up, we came here to button mash, not contemplate our life existence, right?

Gameplay is as simple and classic as they come. Your character has two different modes of attack: normal shots and bombs. Don't stop firing and destroy everything in sight! Well, that'd be great if my hand wasn't so tired. Ice Cream Surfer does not have auto-fire, so you're going to be smashing your buttons for quite some time.

Occasionally, when you destroy monsters, they'll drop power ups. Spoons will give you an ice cream partner that has different effects depending on the color of the spoon. One will take a hit for you, while another one attracts gems and further power ups towards you. Popsicles will strengthen your normal shot. It's simple fun, but it's not without problems. For starters, enemy bullets are colored a dark purple. This is very bad considering the entire game is a complete rainbow, with all sorts of colors appearing all over the place, making the bullets kind of hard to see. It's made even worse with the intro segment to each level; it's implied that you're traveling through space at the beginning of each planet before you actually arrive there, and the background during these segments is colored a dark blue/purple color. You know, space! It would've helped if they colored the bullets the classic red, or made them flash. Something to make them stand out would've helped dearly. 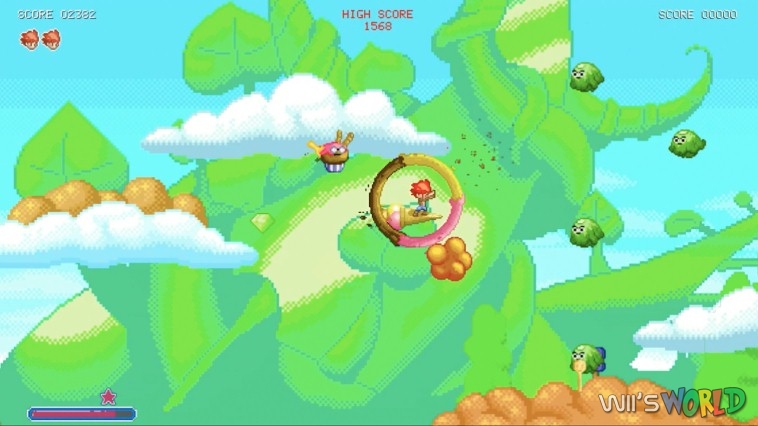 The next problem comes with the the quirkiness of the entire game. All of the characters are literally surfing on some sort of frozen treat, so their hitboxes are really disjointed. I've been killed by bullets that were nowhere near me! Dodgy hitboxes are always very troubling in shoot 'em ups, and the characters' awkward shapes do not help this one bit. At first I thought that their hitboxes were on the characters themselves, but I'm pretty sure that I've gotten killed because my surfboard took a hit.

Speaking of characters, you can pick from five of them. You can play as the titular ice cream surfer, Ace, or any of his equally quirky friends. They each have their own methods of attack, but sadly there are some very distinct balance issues here. You should always pick Ace, as there is almost no reason to pick the other characters. Ace's normal shot is the best when powered up all the way, as it covers a good chunk of the screen. His bomb does a crazy amount of damage, it reaches across the whole screen, and lasts for quite sometime. Compare this to, say, Sailor Twist. Her normal shot fires very slow, and it has a slight spread, meaning her shots won't always go where you want them to. When she's powered up, the shots fire in three so it's better, but still nowhere as good as Ace's shots. Her bomb isn't any better. Some of the characters even have shorter range attacks, so you would think that they'd be strong than the long range characters, like Ace, right? That's not the case either. Rei Tou is the best example of this; his normal shot shoots out a small wave that fades after a small distance. These do the same amount of damage, if not less, than Ace's shots, which gives no advantage to Rei Tou.

Ice Cream Surfer also offers very little challenge. Once you've powered up your normal shot all the way, nothing will ever get close enough to you to be a threat, and they won't even have enough time to shoot back. The bosses are painfully simple, as they usually only follow one or two phases, then loop. Not to mention they get completely decimated by bombs. There's also only six levels, so the game is over pretty quickly. 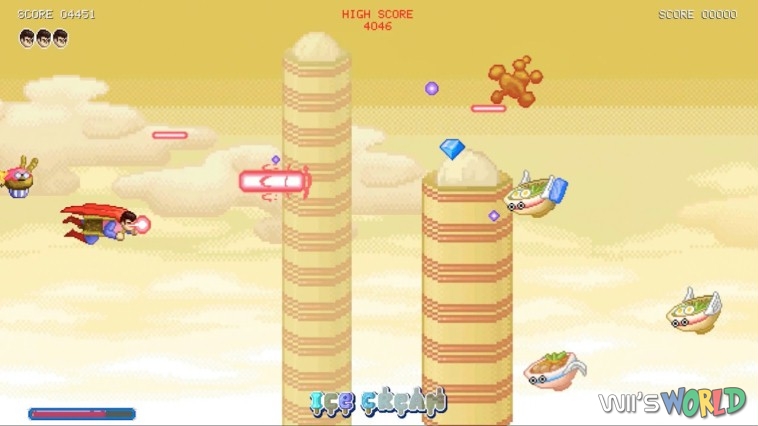 On top of all this Ice Cream Surfer just doesn't feel polished. The menus are alarmingly sparse, and there's a weird pause in between menu selections. Frame-rate drops are also present, but they don't happen too often. There are some bugs as well, with my most memorable example being a boss spawning an abnormal amount of projectiles because I happened to pause the game right when he started the attack. The music is okay but nothing really special, and the sounds effects are serviceable. Each character yells their own version of "POWER UP!" whenever they, well, get a power up! It's a nice touch, but the overall package remains relatively weak.

In the end, Ice Cream Surfer is what I call an "artist's game". It looks great, but strange gameplay tidbits, technical issues, and generally low production values lead to a forgettable experience.